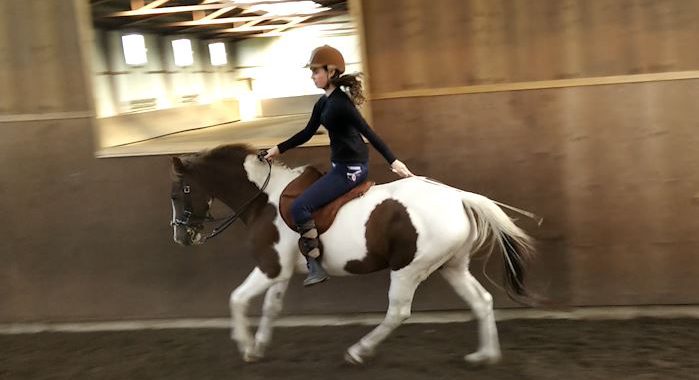 Since early October Vingino and I resumed our canter training. For a long time we have put the subject aside. We did use the canter to make him more active in the exercises for collection, but it has been a long time since we paid attention to improving the canter itself.

Vingino finds it very difficult to canter over the back and to carry the canter with his hindquarter. If I allow Vingino to canter the way he likes to canter, you can see that he keeps his head high and makes a hollow back. In the canter it is the job of the hindquarter to lift the chest and the front legs. Instead of doing so, Vingino uses his head and neck to throw his shoulders up in the canter. He uses his front legs to create the lift in the canter jump instead of using his hind legs, resulting in a hollow back.

To improve his basic canter I use mainly two aids. The first aid is the whip aid on his hindquarter. By laying down the whip on his hindquarter I encourage Vingino to bend his hips and knees more and thus using his hindquarters to lift the front. No more short and pushing hind legs, but long and carrying steps. The second aid I call the forward-upward aid. I encourage Vingino to make bigger steps by thinking forward/medium canter. Of course he is not supposed to fall on his shoulders during the forward canter, the canter must feel forward and upward. That is why I try to think of cantering up a hill in the forest.

These two aids help Vingino getting a larger canter and they help him to get a better horizontal balance in the canter. In the video below you can see the effect of these aids in my canter training with Vingino. We still have a lot of work to do, but step by step we are getting closer to a carried canter with shoulder freedom.

One thought on “Canter training with Vingino”